The federal, provincial and city governments, together with Waterfront Toronto, have announced $5 million in funding to complete due diligence work that will provide greater certainty on the costs and risks associated with the proposal to naturalize the mouth of the Don River, provide flood protection to the area and unlock significant economic development potential – including the First Gulf/Unilever site.

The flood protection proposal addresses the fundamental challenge of transforming the underused Port Lands into a long-term asset that will support Toronto’s growth and economic competitiveness. 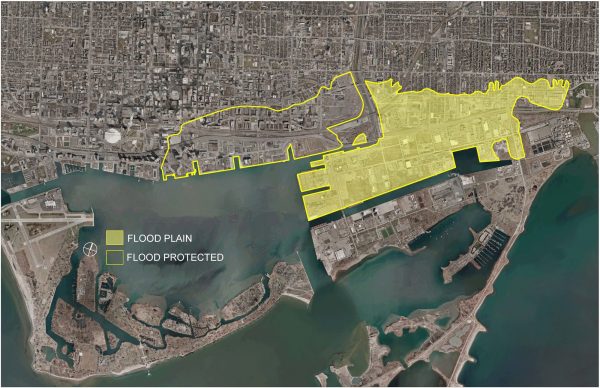 The Port Lands is a 400-hectare parcel of downtown waterfront land, unique in that no other North American city has a plan to unlock such large-scale waterfront development. Currently, about 290 hectares (715 acres) in the area – including parts of South Riverdale, Leslieville and the First Gulf/Unilever development site at the eastern base of the Don River – are at risk of flooding from the Don River watershed and cannot be developed until they are flood protected.

The proposal to flood protect the Port Lands is the largest project proposed in the second phase of Toronto’s waterfront revitalization – also known as Waterfront 2.0 – and is one of the most complex urban flood protection projects in Canada. Last week, Toronto City Council unanimously adopted a staff report that included a Call to Action to governments to commit to funding a second phase of waterfront revitalization.

The due diligence work being primarily undertaken by Waterfront Toronto will provide governments with additional assurance on the estimated $975 million cost of this project, which includes rerouting the Don River to the middle of the Port Lands between the Ship channel and the Keating Channel, remediating the area’s contaminated soil, creating new parks, wetlands and resilient urban infrastructure that will remove the flooding risk, unlock a vast area for revitalization and development – including the creation of a new community called Villiers Island – and create billions of dollars of economic development opportunities. Due diligence work, the first phase of which is scheduled to be completed by November of this year, will enable government funding of the project by providing confirmation of the cost of the project, strategies to mitigate the risks associated with the project, and an implementation strategy.

The Port Lands flood protection Environmental Assessment has already received Ministry of the Environment and Climate Change approval after extensive stakeholder engagement and public consultation over the past decade. The additional due diligence work will include soil and groundwater management strategies that would detail project risks and identify appropriate mitigation measures. The results will be provided to governments this fall, along with an implementation strategy for the project. Waterfront Toronto has proposed a shared funding solution, which would see each level of government provide one-third of the project funding. The project would take approximately seven years to complete and would be ready to start by 2017.

An independent study by PwC done for Waterfront Toronto in 2014 estimates that spending on design and construction on the project will generate $3.6 billion in value to the Canadian economy, 7,672 person years of employment and $346 million in tax revenues to all levels of government.