The bright pink Land Rover bumped across the desert, dust spiralling into the sky and skidded to a halt in front of me; I could feel the eyes of my friends boring into the back of my skull.

“Come with me, we can get properly off the tourist path and stay with a Bedouin” I had promised.

He stepped out of the Land Rover and strolled towards me, a cigarette dangling from his lips.

His name was Ghassab. I had chatted to him briefly online over Couchsurfing, a hospitality website which helped budget travelers connect with hosts all over the world who offered a place to stay for free. 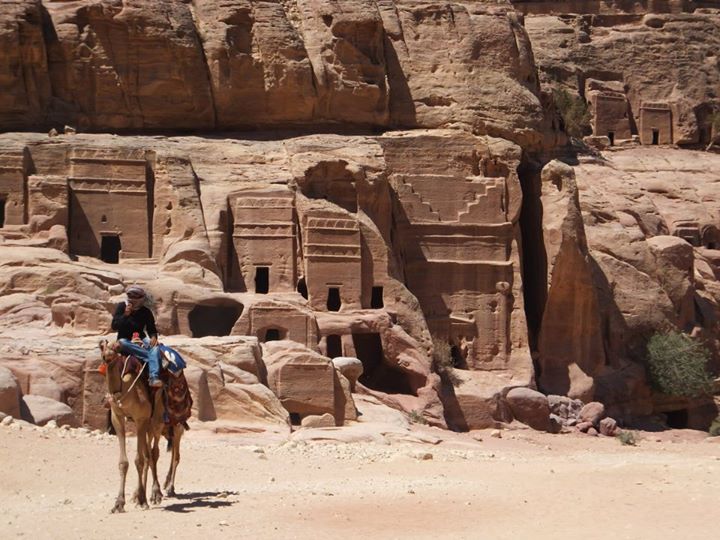 I had used Couchsurfing over a hundred times in the past; crashing with Indian sadhus and Israeli goat farmers, Romanian businessmen and Laotian monks. When it comes to really connecting with the local culture, Couchsurfing is my secret weapon.

I had been trawling the Internet when I had found him. He had instantly stood out. Here, I had thought, was a real adventure.

Ghassab had offered to put me and my friends up in a rock-cut cave his family had owned for centuries. His hair was tangled and wild, his eyes piercing. He stared at me with no expression upon his face.

“I want to see your goats”

It was the right answer. He smiled at me as we piled into the back of the Land Rover. With a worrying crunch of the gear box, we were speeding across the desert. Tantalising ruins and carved facades called to us as we passed a lone camel and rider, eyes fixed upon the horizon.

Time slipped away from us; we must have been driving for about an hour. We cruised past towering piles of rocks and mysterious tracks leading off into the horizon. How anybody could hope to navigate out here I had no idea but Ghassab appeared to know where he was going; he kept his eyes fixed upon the horizon.

Without warning, Ghassab made a sharp right and we left the trail altogether. We drove at speed towards a huge pinnacle of rock scratching at the sky like an outstretched hand. He stopped the Land Rover. 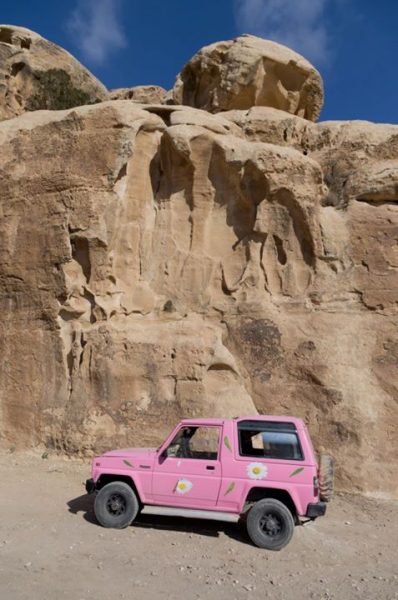 Silence swallowed us as the dust swirled through the air.

I looked around. A small tent, battered and much repaired, lent against a bronzed boulder. An enclosure made from stacked stones and topped with a tarpaulin sat sizzling in the sun. The heat was unbearable.

Ghassab spat loudly and strolled over from the other side of the Land Rover.

He seemed excited. “I am very happy you have come, welcome to my cave”. He stepped back and pointed with an outstretched hand. 50 metres away from us was a large lump of rock, it was perhaps 10×8 metres. I could make out stairs, a gaping entrance and nearby, a fire pit with something shiny, perhaps a pan, glistening in the sun. 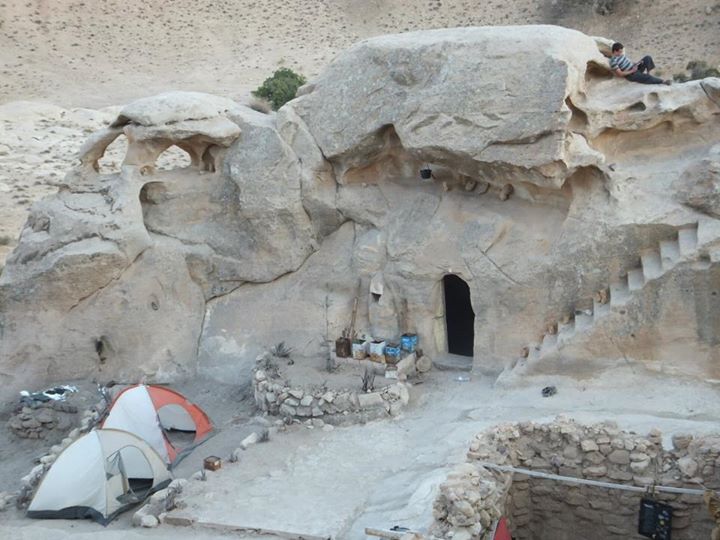 Ghassab beamed at me proudly and then looked up at the sun. His brow creased.

“There is no time to lose, we must gather firewood” he commanded. We dumped our packs by the door of Ghassab’s stone home and headed into the mountains.

Ghassab handed me a sledgehammer and I followed him into the bush. We scrambled and climbed, inching past precarious drops and sliding down rocky gullies. The red desert floor pulled away from us as we ascended into the clouds. “If you want to eat then we must find wood” Ghassab said again, harsher this time.

I sensed we were not climbing fast enough for him, he expected us to keep up. He leapt from rock to rock like a cat, his Rasta dreads bouncing in the sun.

We jogged after him, sweat trickling down our backs until we finally stumbled across some wood. Carefully, slowly, we broke apart the wood by hammering the piece of iron in with the hammer until the wood splintered. 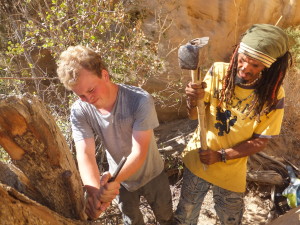 Ghassab had been living in the desert outside Petra all of his life. He told me how he had inherited the rock-cut cave from his family and had bought himself a bright pink Land Rover to traverse the desert with ease. Once, he said, he had driven it to South Africa. I couldn’t tell if he was joking.

Darkness came and we settled around Ghassab’s fire whilst he cooked tender skewers of meat. He passed me a smoke and told me he considered himself to be a Rastafarian Bedouin. Inside his starkly furnished cave, a poster of Bob Marley looked down at me as I admired Ghassab’s collection of trinkets; presents from his past Couchsurfers. 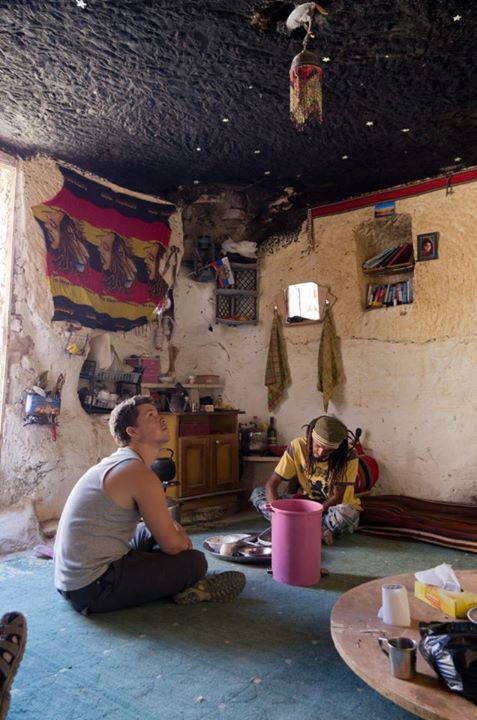 I dragged a mattress up the stairs hacked into the outside of the cave and lay on top of the roof, the stars above me beginning to shine dimly as the sun retreated for the day. The entire valley had turned a deep red as the sun had set and now I could just make out the looming rock faces and twisted formations in the remaining daylight. 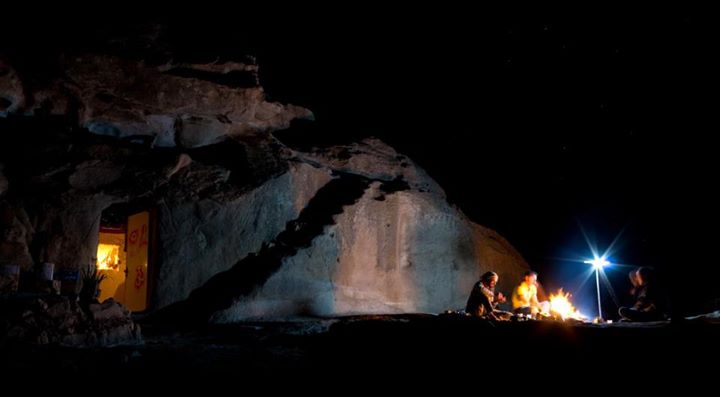 Darkness fell slowly. The desert faded away as the night spread across the sky like a pot of spilled ink. Night was nearly upon us. I scrambled for my head torch and wrapped myself in a pair of scratchy blankets. I lay on top of the roof of Ghassab’s cave, the open sky above me. I snuggled down, my breath coming to me in ragged wisps of air. Tens of thousands of stars glistened above me, dark shapes loomed out of the darkness and monsters turned to stone.

Just a few miles away, I was sure, dozens of tourists would be stepping into posh tents in the many tourist camps scattered across the desert. Whilst I had no doubt that they would be having a good time, it could not possibly rival the experience I was having with my friends, staying with a Rastafarian Bedhouin in a rock-cut cave. This was DIY adventure tourism at it’s best! And tomorrow, I would be hitting up the Indiana Jones-esque ruins of Petra themselves…. 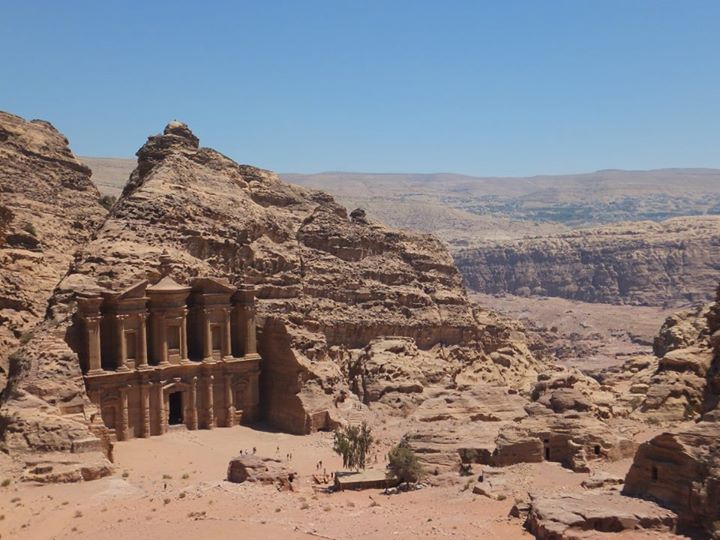 I spent a week with Ghassab, exploring the many rock-cut buildings and caves of Petra, cooking and chatting deep into the night, playing cards and chess and losing myself in the timelessness of the desert. In seven years of traveling, this was to be one of my greatest adventures.

Related Article: Peeking Behind the Curtain of Venezuela 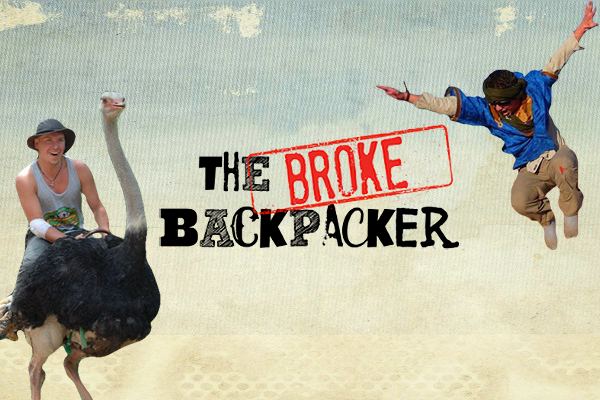 About Will Hatton: Writer and photographer. Adventurer and vagabond. Master of the handstand pushup. Conqueror of mountains, survivor of deserts and crusader for cheap escapades. Will is currently preparing to hitchhike from England to Papua New Guinea, a journey which will take over 18 months. Will blogs over at The Broke Backpacker about his adventures in some of the world’s least visited countries, you can follow him on Facebook and on Twitter.