Every time we speak with Nomad Tours, the landscape around them seems to have changed, and like true nomads, they travel with it. It hasn’t even been a year since we last spoke with Alex Rutherford, Nomad Tours founder, and yet there have been such shifts in trends that it seemed like a catch-up after many had passed. We followed up on how all of the changes Nomad shared with us last time have been received, and heard about the unexpected shift that’s occurred in the company’s direction as, like always, it takes care to listen to the current wants of its customer base.

As you will know if you have been reading our magazine for a while, Nomad Tours is a cross-borders tour company that takes holiday makers on breathtaking tours in 11 African countries, in total. These tours can be tailored to fit client wants, and there is a wide selection of tours to become a part of, meaning that even repeat customers would have many trips ahead of them because they’d been everywhere the company covers.

Originally, Alex founded Nomad Tours in order to provide camping tours around the African bush that correctly managed the balance between authenticity and safety; holidayers could camp under the stars, see African wildlife walk right past their camp, and could get truly in touch with Africa in a way that Alex passionately wanted to share with the world. These tours already existed, but at the time that Alex devised Nomad, many of the existing tours were disorganized and outright dangerous. From this starting point, Nomad developed, combining camping tours with stops in accommodation in order to open it up wider, allowing those of any age and preference to experience Africa their way. However, that outdoorsy, hands-on approach was Alex’s original inspiration, and so, the strong recent shift in what travelers are looking for from their experiences was a surprise to him:

“An interesting development since we last spoke is a move from camping to accommodation, which has shifted massively. Our camping products are shrinking very quickly: even the younger people are not wanting to camp. It’s the biggest change I’ve seen in a single year in all the years since we started. I’ve never seen anything change that fast.”

Alex shared that the move is a sad one for him, in some ways, as that under-the-stars approach to exploring Africa is what inspired him to create Nomad Tours in the first place. However, like any savvy business owner, he’s listening to the clients: the entire way Nomad is run and the way its tours are arranged aims to include as wide a range of travelers as possible, and the company prides itself on providing its customers with what they want, so, as this new trend has quickly made itself apparent, Nomad has listened and responded. Camping tours, which were originally 100% of the packages that Nomad offered, but have rested at 60-70% for the majority of the company’s life, are now down to representing only around 40% of the company’s tours. In the coming years, Alex predicts that figure will become 10%. “We’ll keep the camping product on some of our routes, but it’s definitely not the heart of the operation any more. The company has to evolve, and that’s the evolution.”

Alex began the company after a nearly year-long trip across Africa in 1997, and as you can imagine, much has changed since then, partly thanks to social media and the pace of life it sets. As well as moving away from camping, there has also been a shift towards holiday makers looking for faster-paced, busier itineraries, rather than the slower approach to basking in the surroundings that Alex and his team used to take. “They want to cram more in, and they also want it to be quicker. That’s why we’re doing shorter tours.”

As a part of its response to this change, Nomad Tours is upping the frequency of its group coach tours, and has just commissioned six new coaches to enable this. “We will also be expanding our small group vehicle tours, because that’s going very well and it’s growing.” In fact, this side of business – which has long been a strong suit for Nomad – is growing to the point of official expansion. “From next year, we are starting up a whole East African division. We already run in East Africa, but these are new tours in Kenya and Tanzania. They will be short tours: one will be Kenyan highlights and one will be Tanzania highlights, and both of them will have an add-on beach excursion, to either the Kenyan coast or Tanzania it’s Zanzibar. What’s nice is that all of these products can interchange – you can do any combination of the tour stops, which actually creates quite a lot of different tours.” These tours will be land cruiser based, keeping the vehicles small, and in fact, there will be the possibility to opt for smaller and more intimate group sizes than Nomad has previously offered:

“I did a 60-day tour of East Africa last October, and during that time I did over 200 site inspections. The conclusion I reached was that our best area to work on would be our couples or small family tours, which I saw thousands of in East Africa. There are plenty of East African group tours, but what I saw physically was 95% intimate groups: two people, or even a single person on their own. We don’t do that, currently.” The last time we spoke with Nomad, the company had begun to provide self-drive tours: Alex did not want to push too far in this direction, as this package is, in his words, “overtraded”, and as he explained to us last time, doesn’t offer the guarantees that Nomad like to provide. As every competitor and travel agent offer such tours, and as Alex dislikes the lack of quality control possible in them, the decision was made not to focus energy into developing this area too far. Instead, these resources have been focused towards supporting guided tours for couples, single travelers and small groups. This allows people to have the same privacy as they seek in a self-drive tour, but Nomad can provide much more to their experience.

“Our East African tours will be scheduled to run on fixed dates, but those dates can be booked by one couple or family. It does cost more, and East Africa is very expensive, but it is what people are looking for; they’re prepared to pay more to go as a couple or a couple with their family, rather than join a group tour. That is what those people want, so we will provide it.”

This shift hasn’t just been noticed by Nomad Tours – it is something that is occurring throughout the travel and hospitality sector, with even business travelers looking for more leisure and luxury from their stays. It seems that people want to have as rich and involved an experience as possible; again, potentially because of the rise in social media use, people are more aware than ever of the glamorous and adventurous life they could be living, and don’t want their time and money to go towards something that falls short of that mark.

Alex feels that another thing people expect now more than ever is transparency. By running its new East African tours to set dates and schedules, the company is able to provide an instant quote if asked, which allows smaller groups to book up a tour date without confusion. To a similar end, the last time we spoke with Nomad Tours, the company had undergone a lengthy process to work with travel agencies, its suppliers and go-to locations to attempt a change in the very culture of African travel. More specifically, in the culture when it comes to payments:

Pricing for tours such as Nomad’s has long operated in a curious way within the region: when this type of travel began some 30 years ago, it was difficult to send money abroad, and so payment for tour packages would break down into two halves: one half would be paid to the travel agent in a holiday maker’s own country, and the other would be paid in Africa. This ‘local payment’ would not always happen in one go, however: more often, it would actually be made in multiple payments, to the guides, venues and caterers themselves whilst travelling. This is not an optimum way to travel when on an organised tour, where one might expect everything to be paid for and taken care of already. The situation could lead to confusion for customers, and could cause stressful situations as they saw their funds depleting.

As technology has advanced, the difficulty in sending money abroad has been resolved, and yet the system that evolved 30 years ago has remained. To combat this, Nomad decided to offer an all-inclusive tour, where clients truly could pay for everything upfront, with no hidden or surprise costs. However, the change also meant that the initial cost looks higher than the company’s competitors, at a glance, because all of it is declared upfront. We asked Alex whether this had had an impact: “I do think we’ve lost some sales, but we still feel that the loss is going to be worth it in the long run. People want transparency and they want to understand what they’re involved in, so we’ve pushed through.”

Another push the company made the last time we spoke, again in the name of better practice, was the installation of water purifiers in its coaches. This time, the better practice is in the name of the environment, in an attempt to reduce the amount of water bottle waste that holiday makers were creating. This investment has, happily, seen positive results – especially from younger travelers.

Even with so many changes in its present and recent past, Nomad isn’t sitting still: its near-future is set for significant change, too. Namely, as well as its expansion to its East African tours, the company is also planning to begin running tours in Rwanda – a change it hopes to bring in by late 2021-22. “It’s an incredibly well-run country: it’s beautiful, it’s got good roads, good infrastructure, well-behaved police, easy borders – it’s very, very advanced.” Continuing with his original aim to share Africa with visitors and to show the continent’s true face, Alex is keen to increase tourism to this part of the region.

As always, there is plenty in the works at Nomad. Whilst the shift from slower-paced camping tours to faster paced, shorter accommodation tours seems to follow the trends being noticed throughout the travel industry, the speed at which the change has occurred is surprising. Yet, once again, Nomad is showing itself able to listen and adapt, proving that the company is here to stay and ready to show the coming generations the beauty of the African bush. After all, no matter what may change in the way the company from year to year, its passion for Africa never does. 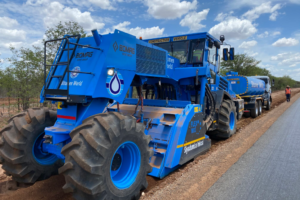