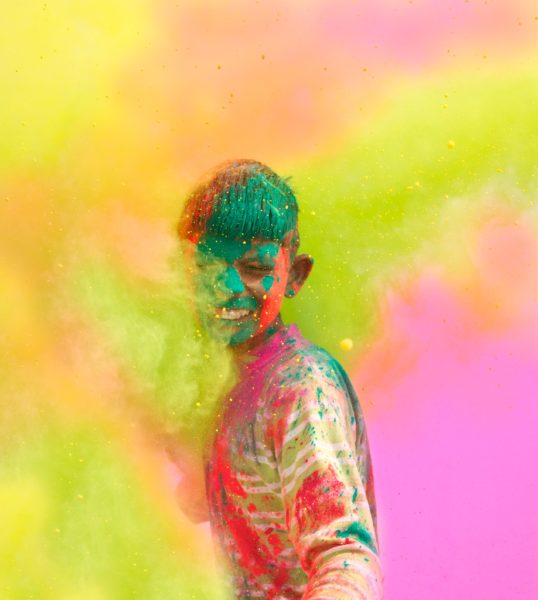 Bonfires crackle, water balloons catapult from strategic hiding places and coloured powders tie-dye the world. It’s time for Holi! Despite its aesthetic recently being adopted by the Western festival scenes as a ‘trendy way to paint your mates’, Holi is an ancient Hindu festival, celebrated throughout India as well as in Suriname, Guyana, Fiji, Mauritius, Trinidad and Tobago and Pakistan. The stunning nature of the celebrations, not to mention the holiday’s playful and mischievous side, has made it a popular subject in Bollywood, providing a vibrant context for many a memorable scene. But what is Holi exactly? How is it celebrated and, more importantly, what is it celebrating?

Known as the “festival of colours”, the two-day celebration of Holi welcomes in the start of spring, saying goodbye to hostile weather with bright and joyful parties, not too unlike Carnival or Easter in that respect. Like Carnival, foolishness is king: as you’ve probably rightly pictured, it is a day where Hindus will dress in bright colours (or white, for added effect) and stain each other with coloured powders, pastes and paints. Friends and loved ones paint each other, either with consent or after a playful chase! Men, in particular, will chase women in an attempt to colour their faces, but all in the spirit of good fun.

That said, in some states, the women aren’t taking the chase lying down – in Barsana and Nandagaon, people celebrate a variation of the holiday called ‘Lathmar Holi’, which means ‘Holi in which people hit with sticks’. Did that give you a clue? In a festival-of-fools-esque reversal of power, women ‘beat’ men with sticks for their colouring attempts. The men take this pseudo-punishment with good humour, and in many cases, hiding behind shields! In particular, women from Barsana, the birth place of Hindu Goddess Radha, will beat the men from Nandagaon, the hometown of Hindu God Krishna. (Radha was Krishna’s consort, but never his wife – perhaps that’s the cause of the beatings?)

Like we said, foolishness rules at Holi, and colours are only part of the fun. Water is also a key element, both over Holi itself and in the days running up to it, with water pistols and balloons the weapons of choice. Between this and the colour-bombs, the common greeting/catch-phrase for the festival is “Bura na mano, Holi hai!“, which means “Don’t mind/don’t be upset – it’s Holi!”

Festivities will usually take place outside, because of their messy nature, with Holi pictures showing heaving technicolour crowds, dust-poppers making colour explosions and musicians somehow managing to perform through the manic haze. To add to this delirium, or arguably to aid a sense of spiritual peace and freedom, Bhang is popularly consumed over the two days. Essentially, Bhang is an edible form of cannabis, made into a puree paste and used in food and drink as early as 1000 B.C. A longstanding and legal tradition, on Holi, Bhang is typically mixed with milk in the form of a lassi, served by families and Hindu temples alike.

So apart from being a great way to spend a day, what is Holi for? As we said, it marks the beginning of spring, and in keeping with that theme, celebrates the triumph of good over evil, but it symbolises more than that. The name Holi comes from “Holika”, the sister of demon King Hiranyakashyap in Hindu mythology. In one version of the tale, the demon king forbade his son from worshipping the Hindu god, Lord Vishnu, but his son disobeyed. As punishment, he was told to sit on a burning pyre. His aunt, Holika, was to sit with him to make sure he burnt, as she herself was immune to fire. However, the son’s faith was rewarded, as Lord Vishnu protected him from harm, and instead, the evil Holika burned.

Whilst the story varies, the idea is the same – faith and goodness triumph in the end. The night before Holi is a more reflective occasion, where worshipers perform rituals around bonfires and pray that their evil impulses will be destroyed as Holika was. The following day’s festivities, then, are a celebration that good still prevails!

Another Holi story involves Lord Krishna being poisoned as a child, which resulted in his odd blue skin. Afraid that the light-skinned Radha would not find him attractive because of his blue hue, he painted her face with colours, hence the chasing and painting still played today!

Whilst Holi is a Hindu festival, it has also become a well-loved cultural staple, and thus can be celebrated by natives of any faith. More than anything, it is treated as a day to enjoy friendship, repair damaged bonds, and kicked off the weight of winter with the merriment of spring. Whilst India occasionally struggles with the divides between its faiths, this is a day that most people can get involved with, to whatever degree they’re comfortable with, to forget serious matters for a moment and have fun together. Bura na mano, Holi hai!