From entertaining the heads of industry to documenting some of the most beautiful destinations in the world, Anthony Osmond-Evans has built enviable careers for himself. A blend between good fortune and old fashioned hard work has seen the writer/photographer/publisher travel the world and rub shoulders with legends along the way. Now, he is looking to turn his experiences towards something that will not only commemorate, but inspire, real change.

Anthony Osmond-Evans is best known for his stunning coffee table books, including China the Beautiful, The Magic of Monaco and, most recently, The Spirit of London for the 2012 Olympics and the Queen’s Diamond Jubilee. His books, which have sold over 100,000 copies to date, document the history and aesthetic of locations around the world, featuring Osmond-Evans’ writing and mainly his own photography. He is currently working on three new ventures, the most ambitious of which is still in the planning stages and would be a marked departure from his previous work, but is already receiving enthusiastic backing and support.

We spoke with the author about how his series had come about. Surprisingly, Osmond-Evans’ career didn’t begin in publishing, photography or writing; in his twenties, he cut his professional teeth by marketing whisky for The Distiller’s Group, a venture that saw him stationed for a time in Hong Kong. It was here that he contracted the travel bug, a fever that would grow for some years before it would take him back to Chinese shores. “I got my first taste of China, and I knew that one day I’d have to go back there and photograph it,” Osmond-Evans recalls. “I didn’t know when or how or why, but it had been in my mind from those early days.”

“I’ve always been one to grab an opportunity, and that very much comes from my great hero, a photographer called Henri Cartier-Bresson. He had the eye: his images were all about capturing the moment. His famous quote was, ‘If it grabs me, I grab it.’ Life’s a bit like that for me – if an opportunity comes up, I grab it.” One day, this attitude would lead Osmond-Evans back to the country that had captured his heart, though it would take him via an unexpected route.

Working with The Distiller’s Group led Osmond-Evans on to other marketing and PR work, until he set up his own company called Good Connections. The company served as a networking third-party, receiving advances from a pool of companies with which to wine and dine the heads of industry and promote these clients’ services. “What I’d achieved was to be working as an agent, as an ambassador, for some twelve different disciplines within the service industries. They were large firms, and they all provided services to companies like the electricity board – big firms working for big companies.” Through working in this way, Osmond-Evans was mingling with an upper-echelon of business contacts. “I was just about old enough by then to have the clout to meet and talk to a head of industry, because no-one wants some whippersnapper!” It was through these contacts that his life took an unexpected turn, and the skills he had learnt would start to enable the dream that was cooking away at the back of his mind.

“The first person who gave me a book to do was Sir John Baker, or John Baker, as he was then.” Baker was the head of the Central Electricity Generating Board, which had recently been split into three companies and opened onto the public market. Post-split, Baker headed the company known as National Power, and worked with Osmond-Evans to navigate their new need for publicity.

“In that time, I had gotten to know John Baker very well – terribly nice man, charming wife. I used to show him pictures, such as pictures of where I’d been travelling.'” Impressed by these images, Baker asked whether his friend could put a book together for him, and just like that, a new career was seeded. The commissioned project would be a coffee-table book of cityscapes and other examples of lights at night across England, Wales and Ireland, where the company operated. “The company was called National Power, so we called it National Lights.”

National Power used the books as gifts and marketing tools for their stakeholders, suppliers and potential clients. This idea inspired Osmond-Evans; after seeing it could be done, he went after his own project – and travelled back to China. “I covered a lot of China, including the Tibetan Plateau and Tibet, as I had done in the ‘80s. This sounds a bit arrogant, but they were pretty good pictures!” His first personal project, China the Beautiful, became a reality.

Now, Osmond-Evans’ line includes numerous titles, some commissioned and others his own ventures. To fund his personal projects, he approaches sponsors, again pitching the endeavours as purchasable corporate gifts. Sponsoring companies put a certain amount of money towards the project and receive a certain bulk-order of books in return, which they present with their own messages and dust-covers to those of their choosing. It is an approach developed out of Osmond-Evans’ earlier career days, and as time passes and marketing changes, it continues to work.

For China the Beautiful, Osmond-Evans’ success in finding Chinese and China-related sponsorship was aided greatly by the book’s foreword, written by former British Prime Minister Sir Edward Heath, who had built good relations with China during his time at Downing Street. “He was highly respected, and the fact that he was associated with my book meant that I must be OK too.” Osmond-Evans was able to approach Heath via a mutual contact: this was typical of the way in which his history in networking would open doors, and once it began, it was a spiralling process. “I travelled a lot, I met people, I continued to meet people, and it has very much a snowball effect.” It was also a process aided by Osmond-Evans’ membership in several key clubs, including the Marylebone Cricket Club (MCC), the famed Explorers Club in New York and Glyndebourne.

Today, Osmond-Evans lives in Suffolk with his girlfriend, Sylvia Loch, the world’s leading author on dressage, where they co-habit with their horses, dogs, barn owls, hedgehogs and a rather luscious vegetable garden. It’s an enviably idyllic setting, and whilst the two writers focus on different topic areas, the mixing of creative minds allows them to spark ideas off one another and keep each other motivated.

For Osmond-Evans, this motivation is to create something that will live on after him. He is currently working on several publications, including one on the legends of Las Vegas and another on Hull, named the UK City of Culture 2017. As well as these, the photographer is planning a very different project: the book’s working title is Heroes, and the subject will be just that – 50 heroes, living around the globe today, photographed and interviewed to produce an inspiring collection of true stories. Whilst speaking with them, the author also plans to ask interviewees who their heroes are, to further expand the narrative and see who has inspired the actions of these great figures. 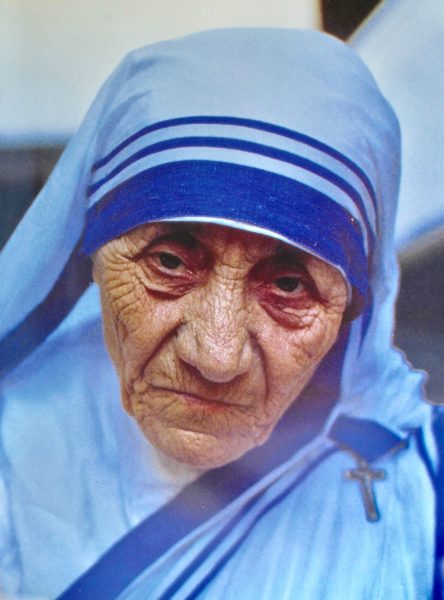 Some of the confirmed participants for Heroes are people Osmond-Evans has already been fortunate enough to meet during his work and travels, including FW de Klerk, the former South African President who was jointly awarded the Nobel Peace Prize alongside Nelson Mandela for their combined efforts in ending apartheid. The book’s foreword will even feature the late Mother Teresa, who Osmond-Evans had the opportunity to photograph two years before she passed away. Despite the controversies that exist around the saint, she inarguably made a vast difference for the dying poor in India with the opening of her hospice in Kolkata: whilst she is not one of the 50 living heroes to be included in the work, Osmond-Evans will feature her portrait and write about the very special experience he had listening to her; “She spoke for nearly an hour, and all the time she was holding onto my hand – clasping it between her two tiny hands. It was one of the most significant moments of my life.”

This new project has been inspired in part by the idea of pluralism – the coming together of different cultures and faiths, where differences are celebrated and explored. It is a concept Osmond-Evans encountered in Lisbon, Portugal, whilst speaking with the Ishmali Cultural Centre. The Ishmali are an Islamic group of over 15 million followers, led by H.H. Prince Shah Karim Al Hussaini, Aga Khan IV, with a focus on helping others and cultivating an attitude of acceptance.

Heroes will combine a range of figures, from Pakistani activist Malala Yousafzai for her bravery in the face of the Taliban, to British entrepreneur James Dyson for his generosity and support towards the future of the British design engineering. A spectrum of causes and walks of life will be included – the only heroism excluded will be military triumphs, not as a comment against the military, but because this would distract from the author’s specific definition of ‘hero’ within the book. “We will feature a photo of a pregnant mother – all mothers are heroes.”

Collecting these diverse heroes from around the world is, for Osmond-Evans, an attempt to show the common good that goes beyond nationality or faith. He hopes that it will not only inspire readers with the stories it will contain, but also inspire conversation between groups and help people to see the good that exists across borders and barriers. This raising of awareness has been a motive behind all of his global publications, but it coming to a head in Heroes:
“I have quite a strong humanitarian streak in me. I was a bit ‘Bertie Wooster’ growing up – I’d turn up in these countries in a panama hat and a nicely cut Savile Row suit and so on, but life isn’t like that. It’s rough. I’ve been lucky, but for a great deal of the world, it’s tough.”

In the wake of the world’s current turmoil and political drama, Osmond-Evans’ proposed book seems perfectly timed: on the one hand, we are making leaps in acceptance, communication and equality un-paralleled in human history, whilst on the other hand we are seeing a pendulum swing back towards extremism in a move that is ripping across the globe, and bringing with it, an increasingly loud rhetoric of us-vs-them.

“I’m turning 74 this year,” reflection the author; “And I’d like to do something eminently worthwhile with my time – to get my message out there.”

Anthony is a mixture of English gentleman, entrepreneur and a true artist, and Heroes is a labour of love for the author. It is a work in progress and the gears are beginning to turn, with several sponsors and participants already on board. He estimates that the project will be complete by 2019; “The main thing now is to get a major sponsor for the book. It will involve a lot of travelling and a lot of photography. Once we’ve got this major support, then we can go out and fulfill the dream.”