Every winter, for thousands of years, the Kukeri dancers of Bulgaria perform a vibrant spectacle to battle against the darkness. The tradition has been ingrained into the country’s culture for generations – so far back that no one knows where it even originated from. Throughout the months of January and February, communities pull together in villages, towns and cities across the nation to put on a fearsome display of dancing, bell ringing, and a truly sensational visual performance. 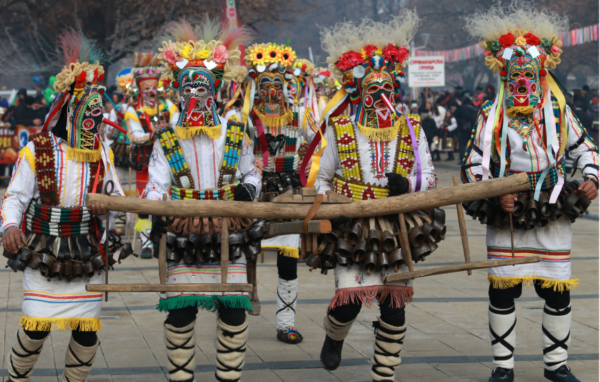 Even though no one knows how the ritual began, they know why: the Kukeri dancers’ aim is to drive away the evil spirits that they believe frequent the area during winter. Alongside ridding these devilish sprites, the dancers also hope to invite prosperity and joy into their communities, to have a plentiful yield in the harvests of the year to come, and to wish good health onto all.

A crucial part of the festivities are the outfits. These elaborate pieces are made from scratch and can take all year round to make. Some families even rear their own goat specifically with its fur coat in mind, which means that it can take up to 7-8 years to rear the animal and then transform it into a costume. The coat of a sheep is also commonly used as the main body of the uniform, whilst huge copper bells that are crafted especially for the festivities are strapped around the waist with a leather belt that can ring at a tremendous volume. Ribbons, feathers, beads and other trinkets can be added on personal preference, too, making the result as eye catching as possible.

To finish off the immaculate dress–up, large masks are fashioned from either wood, fabric or papier-mâché. Many of these masks bear an animalistic appearance, whereas others are better defined as monstrous. Each mask is different, and the costumes are personalised to represent the various regions and districts of Bulgaria, as well as the characteristics of the person beneath the mask.

Though the aim of the festival is to rid evil, it may seem like a rather sinister affair – particularly with the ‘demonic; attire. However, there is rationale behind it all – if you want to scare off evil spirits, then you have to appear ever scarier yourself! 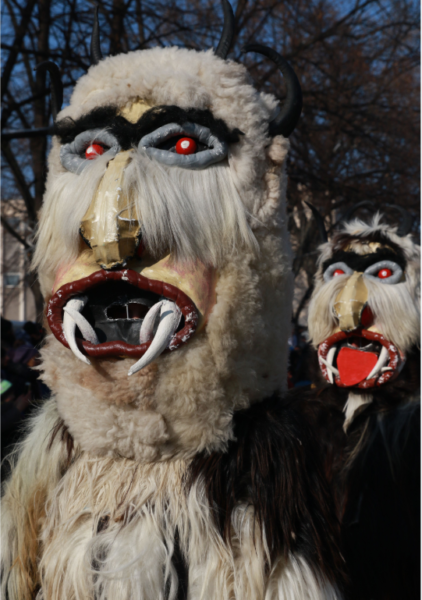 Historically, the festivities were only enjoyed by the male populous, but throughout the 20th century, women and children were fully integrated into the rituals. This means there are now even more Bulgarians dancing down the streets, bells rattling incessantly into the air to warn off the dark spirits.

The Kukeri can usually be seen at various times between the start of the new year in January, and the beginning of Lent in February. However, there is one particular event that brings the whole nation together, and even attracts attention on the international scale: Surva Festival (officially known as the International Festival of Masquerade Games), draws all the participants of the Kukeri rituals across the country to the town of Purnik, an industrial centre of Bulgaria. Thousands are involved, casting away the evil spirits that they encounter, in true spectacle. Since the festival was formed in 1966, it has gained UNESCO status as a centre of cultural heritage.

Across Central and Eastern Europe, other countries participate in closely related festivities, donning similar attire. In Hungary, there is the annual celebration of Busójárás, in Slovenia they have the Kurentovanje carnival, and in Romania the Cucii – these all happen in a similar timeframe between the start of the new year and lent, and follow the similar purpose of wishing for a good year ahead.

No one knows where the Kukeri ritual began, but regardless of where is originated, it has stood the test of time, particularly in a country that has suffered numerous oppressive occupations by foreign regimes. It shows a sense of national and cultural pride, and continues to provide the locals with joy that is steeped in rich cultural tradition. Evil spirits, be gone! 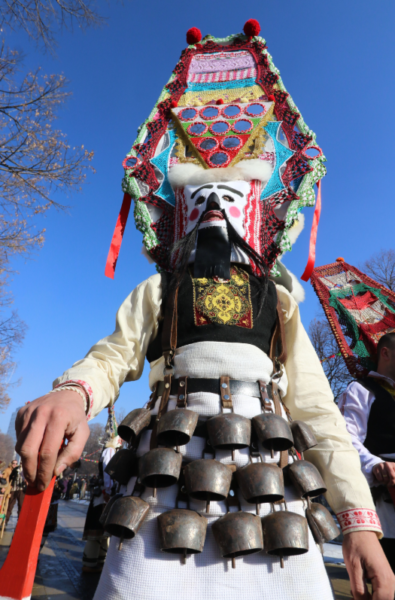