Once again, it has been a very hot month across the globe. Heat waves have spread throughout Europe, Asia, Africa and the Americas. The weather may have meant that you were able to get a lovely tan, but these extreme weather fronts haven’t been without consequence – wildfires have been widespread across the globe, especially in areas where they are less common, such as the U.K., Sweden and Greece. These freak fires are usually caused by humans or lightning and are mostly found in the more hostile areas of the world to live in, such as Australia. However, it has come to our attention that there is another twisted fire starter in the land down under, and it is one that you would not have expected… 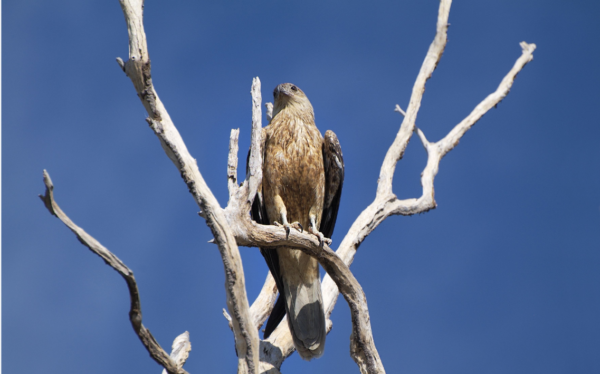 Firehawks: you may not be familiar with this term, but these birds are a group of raptors that supposedly possess the ability to spread wildfires. The firehawks are more well known as the Black Kite, Whistling Kite, and Brown Falcon. They are all natives of the Northern Territory (NT) of Australia, where this behaviour has been documented. These birds of prey, according to eye witnesses, are able to take burning sticks or debris from wildfires that are already ablaze, transport these with the talons or beaks then drop them into an untainted area of bush or woodland, therefore starting another blaze. This is either done individually or as a group, and is repeated until a successful blaze has started. Bob Gosford, an Ornithologist, states in a 2016 interview that, “It’s a feeding frenzy, because out of these grasslands come small birds, lizards, insects, everything fleeing the front of the fire.” In his 1964 autobiography compiled by Douglas Lockwood, Waipuldanya Phillip Roberts, a member of the Alawa people from the NT said, “I have seen a hawk pick up a smoldering stick in its claws and drop it in a fresh patch of dry grass half a mile away, then wait with its mates for the mad exodus of scorched and frightened rodents and reptiles.” From this observation, we can ascertain that this isn’t a recent behaviour attributed to the firehawks.

Thousands of years before the introduction of Caucasian settlers to Australia, Aboriginal communities thrived on the land. In the NT, the people known as the Dalabon, the Rembarrnga and the Mayili still populate the region today. They have been more than familiar with firehawks throughout their history and have their own name for the birds of prey: “Karrkanj’, which in their language means “Troublemaker”. The Indigenous people have been aware of the birds’ behaviour for a long time. From interviews conducted with these communities, documented sightings, and rituals practised by the people of the NT, it is strongly suggested that the firehawks have been displaying their fire handling skills for well over a century. Gosford has observed rituals in the territory by the Lorrkon and Yabuduruwa people (also from the NT) that consist of the reenactment of a bird spreading fire from one place to another. This are known as the ‘Dreaming Fire Ceremony’. The Karrkanj is so important to the people of the region that the Mimal Land Management company, that looks after the land and assists with putting out wildfires within the Arnhem region of the NT, have incorporated a raptor carrying a fire stick into their logo.

There is much significance to the discovery of firehawk activity for Western academia. This is the first known example of fire usage by non-human animals: although they are not starting a fire from scratch, the birds successful utilise the natural resource for their own benefit and survival. Intelligence in animals is famously underestimated throughout humanity’s history, and if video evidence of firehawks in action can be gathered, then this will truly be revolutionary and completely change the world of Ornithology. It is also a momentous time for Indigenous communities across the globe; after centuries of Colonialism, Indigenous groups still strive for recognition on a local and a global level. Many Western academics are reluctant to rely on Indigenous sources for historical and scientific accuracy, as they tend to use the oral tradition to pass information through their communities. This ‘discovery’ will affirm that the people of the NT have been right about the Karrkanj’s ingenuity this whole time, and that they are entitled to the relevant credit and respect. Awareness of firehawks could obviously also help tell us to better understand and deal with the spread of wildfires within Australia – with knowledge that the birds of prey may be spreading the fires further, firefighters will be able to manage this easier in the future. The findings within the NT even have some academics questioning humanity’s early interactions with fire, suggesting that these raptors could have been utilising it long before us.

Hopefully we will be able to see video evidence of the Karrkanj in action in the near future – a thrilling yet chilling sight of the cunning of birds smoking out their prey from the woodlands and bush lands. Humans have underestimated their fellow inhabitants of the Earth for too long now. Next time you call someone a bird brain, think twice – you may be paying them a compliment!