The tiger reigns supreme as the largest big cat on earth. Weighing in at an average of 204kg (450lb), they are a creature to be admired. One of the tiger’s six subspecies, the Siberian (Amur) Tiger, can even weigh up to 300kg and grow up to 4m (13ft) in length. The other five subspecies are the South China Tiger, the Malayan Tiger, the Indochinese Tiger, the Sumatran Tiger, and the Bengal Tiger. The most numerous subspecies, it is believed that 2,000 Bengals populate the wild, which is 50% of the wild population of tigers in total. It is concerning to know that there are under 4000 tigers left in the wild now, because at the start of the 20th Century, the global population was roughly 100,000, and a 96% decrease has been witnessed. Tigers were once known to range across the regions of Western, Central, and South Eastern Asia, but are now mainly found within Indian and Siberian regions. 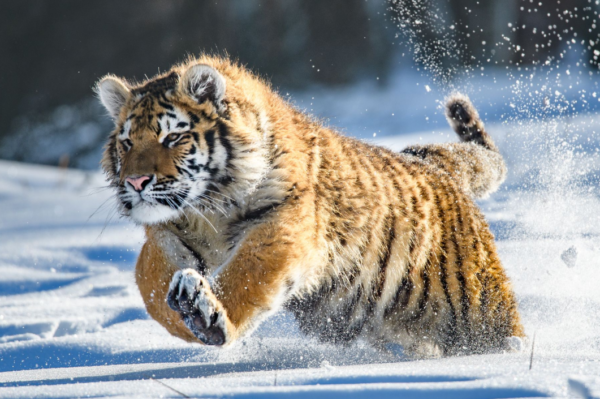 In the animal kingdom, tigers are known as a charismatic megafauna, a large animal found historically in mythology, folklore, religion, films and literature, with a strong symbolic value. Tigers are still seen as deities in religions such as Hinduism, and are prized as symbols of national pride in the various countries that they roam. Although this admiration of the tiger is clearly apparent, the creature has been, and still is, threatened by continued poaching and illegal trade of its body parts, even though the trade of tigers for commercial use was banned in 1987. The illicit industry is worth $19 billion dollars.

This unsettling demise of the wild tiger population can be linked to various factors. Traditional Chinese medicines use various body parts of the tiger for a variety ailments. The meat is also served as a rare delicacy, and there is even wine available for purchase that is created from tiger bones (which is thought by some to pass the strength of the tiger onto the consumer). Tigers are also poached for their furs and kept as pets. Tiger farms have been on the rise in China recently, and these supply the demand for tigers and their body parts, even though they are participating in an illegal trade. 8,000 tigers are believed to be kept captive in tiger farms, double that of the global wild population. A similar number of tigers are kept as pets in the USA. Approximately 7,000 tigers are kept in houses, apartments, and other unsuitable environments for an animal that belongs in a vast wild habitat.

It is not all woe for tigers, however. Staunch conservation and global cultural shifts beckon a positive future. CITES, the treaty that regulates the international trade of wildlife, now demands that countries with captive tigers report on the welfare of these creatures, and that tiger farms such as the ones in China make sure that they’re not entering into the illegal trade. The use of traditional medicines in China is now waning, and as we travel deeper into the 21st Century, the use of scientific medicines has become much more dominant in Chinese culture. Experts who aim to increase tiger numbers in the wild also believe that there is still enough habitat across Asia to home up to 20,000 tigers, these being areas away from human settlements. It is paramount that the animals that currently live in captivity are eventually re-released into the wild. The average tigers roam up to 1,500 miles /3,885 sq km – it is clear that living in a tiger farm in China or an apartment in the United States will cause the tiger undeserved stress, which inevitably leads to attacks.

There has been friction between humans and big cats for some time, but it is more than possible for each to live side by side, albeit not in the same apartment. In the Western Ghats of India, an indigenous group called the Soliga are doing exactly this. In their Hindu religion, the tiger is a deity and is believed to be an animal transport for the goddess, Durga. This culturally ingrained respect for the tiger, and their vegetarian diet (also stemming from Hinduism) has allowed the Soliga to successfully live in the same habitats as the tiger. There hasn’t been a single recorded incident in their community, and this could be due to the fact that there is no livestock for the tigers to attack, and no competition over hunting prey in the area. The Soliga also believe that the tiger benefits the community, as it protects their crops from other animals, and stops any raiders coming into close contact with the Soliga. The story has added intrigue, as other non-Indigenous groups in the region have in fact had numerous incidents with tigers. This clearly suggests that there is something to learn from the environmentally harmonious lives of the Soliga peoples. It is also very promising to hear that initiatives are in place to reintroduce tigers into the wild where they once roamed. In 2017, it was announced that tigers were planned to be reintroduced into Kazakhstan. The animals were wiped out there in the 1940s, due to hunting and the loss of habitat. They will be reintroduced into a nature reserve with enough space to roam, where they will be kept safe from poachers and will have enough food to live on. The project will commence in the Ili-Balkhash region, an area the big cats used to inhabit. If all goes well, then the tigers are scheduled to be introduced back into Ili-Balkhash by 2025. Askar Myrzakhmetov, the Minister of Agriculture in Kazakhstan, said: “Kazakhstan is moving along the path of green development. We are honoured to be the first country in central Asia to implement such an important and large-scale project, that not only will bring wild tigers back to their ancestral home but also protect the unique ecosystem of the Ili-Balkhash region.”

There is also a success story on the other side of the tiger’s historical range, far east in the wilderness of Siberia. Successful conservation by the WWF and assistance from the Russian Kremlin has seen their numbers rise from 330 in 1995 to 540 in 2015. Putin himself is a big fan of the Amur Tiger, believing it is a powerful symbol synonymous with national pride, and has seen to it that logging in their natural habitat is banned, as well as increasing the fines for those involved in illegally commercializing the animal. In the 1930’s, there was a population as low as 20-30 Siberian Tigers, showing how far they have come since then.

A similar story can be heard in Nepal, a small country bordering India. Through rigorous conservation and assistance from the government in protecting endangered species, the country that had 121 tigers in 2009 has now almost doubled the population to 235 in 2018.

The main conservation group working with wildlife experts across the tiger’s range in Asia is the WWF. Their aim is to increase the number of wild tigers to more than 6,000 in 2022. This year is particularly symbolic, as it is the next ‘Year of the tiger’ in China. The initiative is one that is already showing quantitative successes. The number of wild tigers has risen from 3,200 in 2010 to 3,900 by 2016. If this upward trajectory continues through habitat protection and anti-poaching patrols, then there is no doubt that the WWF will be able to reach their target to stable the community of beautiful tigers living wild and free. Let’s hope that 2022 really will be the year of the tiger!