Located in the Arusha Region of Tanzania, sitting below the Ol Doinyo Lengai volcano within the Gregory Rift, Lake Natron is a beautiful yet sinister wonder of nature.

Fed by the Southern Ewaso Ng’iro River plus a number of mineral-rich hot springs, the entire lake is less than three metres deep and, at its fullest, is approximately 35 miles long by 14 miles wide. Despite its vast size, it is only the sixth largest lake in Tanzania. 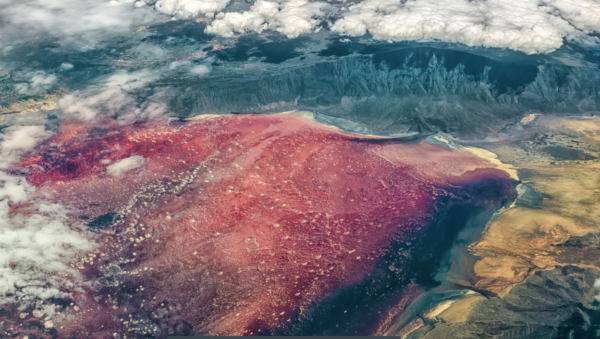 The most striking feature of Lake Natron however is the deep red colour of the open water mixed with the often orange hue of the shallower parts. This is a characteristic of lakes with a very high evaporation rate, as salinity levels increase to the point where salt-loving microorganisms thrive. It is the cyanobacteria in these organisms that produces the colouration within the lake.

Due to the high level of evaporation leaving behind certain minerals plus the composition of the surrounding bedrock, Lake Natron has concentrated into a caustic alkaline brine that tends to leave a salt crust on the surface. This is often red or pink in colour itself due to the same microorganisms found in the water.

The lake’s high temperature and intense salt content tends to repel most animals, however it is home to some invertebrates and birds. In fact, it is the only regular breeding ground in East Africa for the lesser flamingos, who depend on this one location. Gathering along the nearby saline lakes to feed on algae, the flamingos then nest on seasonally-forming islands on Lake Natron, protected against predators by the caustic environment.

Amazingly, two endemic species of fish can be found in the slightly less salty water around the edge of the lake, living right on the doorstep of the much less hospitable environment.

These red waters are also referred to as ‘The Petrifying Lake’ for a very good, though macabre reason. Animals that perish in the water are turned into statues through calcification, preserved by the sodium bicarbonate content. A number of expeditions to the lake have led to the finding of various birds, including flamingos, fish and even bats eerily captured post-death.

The question has of course been asked as to why so many animals are found in this state in the water. One theory is that the reflective nature of the lake causes birds to crash into it, however the bats’ sonar would not be fooled. It remains a mystery. What is known is that the waters of Lake Natron will continue to be deadly to most species.

It is perhaps not unexpected that there have been attempts by Tanzanian companies to develop soda ash plants on its shore. The expectation is that plants such as these would pump water from the lake and extract the sodium carbonate, which would then be converted to washing powder. This would require other builds: workers would need housing too and a power plant would be needed to supply energy to the entire complex. However, in 2018, the government shelved all development plans after a review of how it would affect the natural habitat.

That said, it is inevitable that an untapped resource such as Lake Natron will one day be plundered for the minerals within the red waters. With a risk to the nesting rare flamingos, it is a significant ethical dilemma but one that hopefully Tanzania will find a suitable solution to when the time comes.

Jellyfish Lake
An eye on the tiger